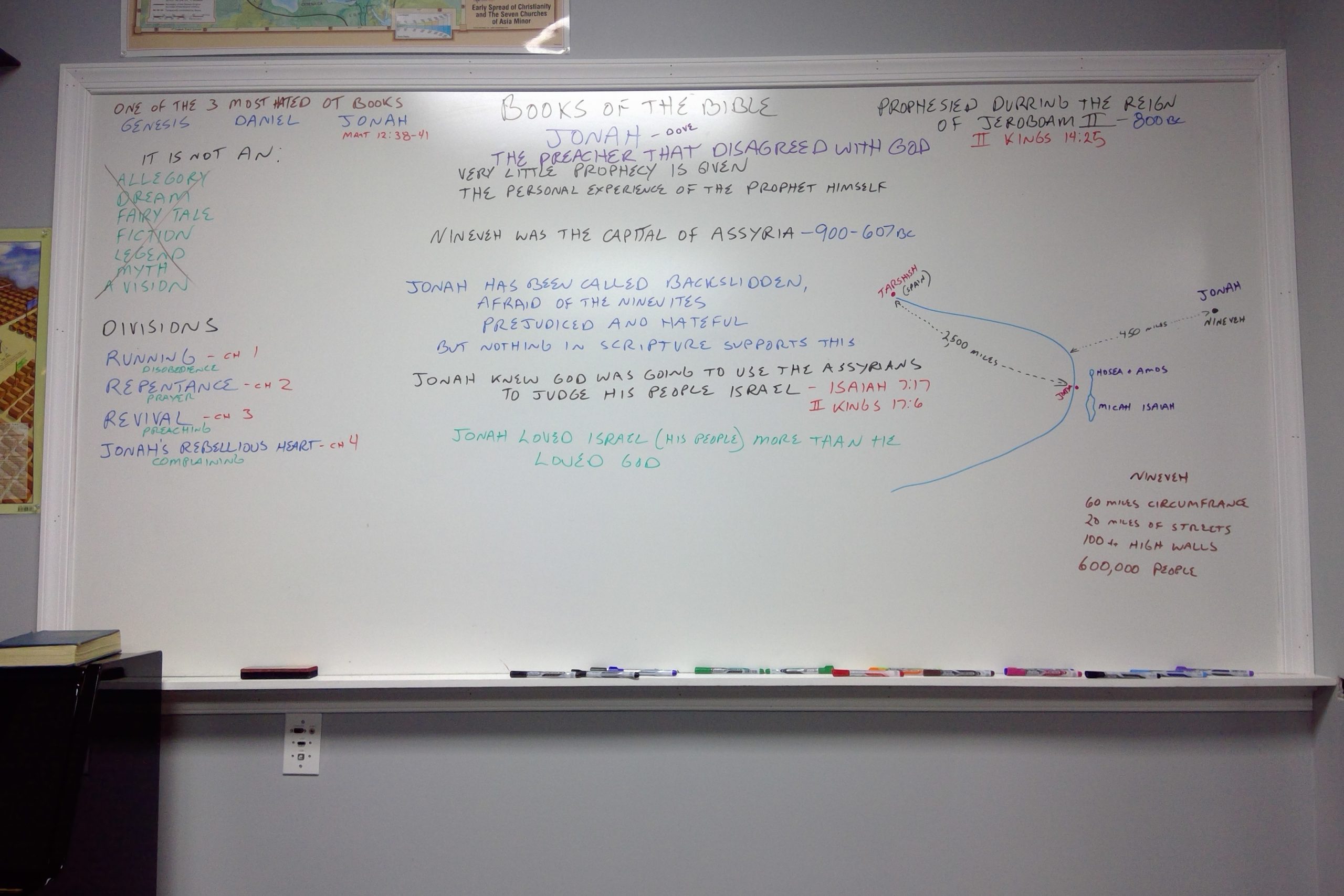 His prophecy was in the Northern Kingdom.

He was a contemporary of Hosea.

WRITER:       The author, of course, is the Holy Spirit, who used Jonah to write the Book.

– He resided in Gath-Hepher in Zebulun, a village approximately one hour’s walk north of Nazareth.

– Jonah was probably a disciple of Elisha.

– Legend says he was the son of the widow of Sarepta.

– He prophesied the victories of Jeroboam II against Syria.

WRITTEN:     The Book of Jonah was written during the time of the great Assyrian Empire’s control of the world.

Nineveh was the capital of the Assyrian Empire.

The Book of Jonah is different from the other Minor Prophets in that it gives a personal experience of the prophet himself.

There are only eight actual words of preaching in it.  The rest is personal experience symbolizing, of course, the burial and resurrection of Christ, as our Lord Himself stated in Matthew 12:38-41.

THEME:  “Jonah’s Revival in Nineveh.”  Nineveh was a wicked, Gentile city.  Jonah was a Jew who was called of God to preach a revival in Nineveh and to cry aloud against her iniquities.

INTRODUCTION:  Jonah is the most maliciously maligned book in the Bible (Matt. 12:39-40; Luke 2:34). It is spoken against by conservatives and liberals alike. The account of Jonah’s been called an allegory, a dream, a fairytale, a fiction, a legend, a myth, and a vision. The credibility of the Lord Jesus Christ rest upon the true story of Jonah and the whale (Matt. 12:40).

Jonah was a prophet in Zebulun of Galilee (Josh. 19:10-13; 2 Kings 14:25; John 7:52) and he lived during the reign of Jeroboam II. The historical account of Jonah portrays prophetic events. The three days and three nights in the belly of the whale picture the death, burial, and resurrection of Jesus Christ (Matt. 12:38-40).

Spiritually, Jonah pictures a believer who is upset with God about his circumstances or his calling in life.

Jonah was called to preach against Nineveh, the capital of Assyria (Isaiah 37:37), but he did not care for the Assyrians. Jonah was not afraid of the Assyrians; he wanted God to destroy them for their wickedness. If God destroyed Nineveh, the Assyrians could not be used as the instruments of judgment against Israel (2 Kings 17:6; Isaiah 7:17). His burden for Israel overruled his call to Nineveh.

III.       JONAH’S SECOND CALL.  Notice in Jonah 3:1, “And the word of the Lord came unto Jonah the second time….”  Isn’t it wonderful that God calls the second time!  Think how many people in the Bible God called the second time.  He is long-suffering and patient.  He will not always linger, but He will call the second time.

JONAH’S SIN.  Jonah 4.  Here is a tragic story.  Jonah had preached, revival had come, but then he became sad.  He felt that God had forsaken him because he had predicted that God would overthrow Nineveh.  When Nineveh repented and God did not overthrow her, Jonah was saddened.  He did not have real, sincere compassion.  May God give us a compassion for our cities, our country and the people!

6 And the Lord God prepared a gourd, and made it to come up over Jonah, that it might be a shadow over his head, to deliver him from his grief. So Jonah was exceeding glad of the gourd.

7 But God prepared a worm when the morning rose the next day, and it smote the gourd that it withered.

8 And it came to pass, when the sun did arise, that God prepared a vehement east wind; and the sun beat upon the head of Jonah, that he fainted, and wished in himself to die, and said, It is better for me to die than to live.

10 Then said the Lord, Thou hast had pity on the gourd, for the which thou hast not laboured, neither madest it grow; which came up in a night, and perished in a night:

11 And should not I spare Nineveh, that great city, wherein are more than sixscore thousand persons that cannot discern between their right hand and their left hand; and also much cattle?

Jonah was mad at God. God was patient because Jonah was honest about his frustrations. God’s questions were designed to get Jonah to learn something about the powerful methods of God.

The book of Jonah reveals the following lessons: