An Overview Of The Book Of Habakkuk 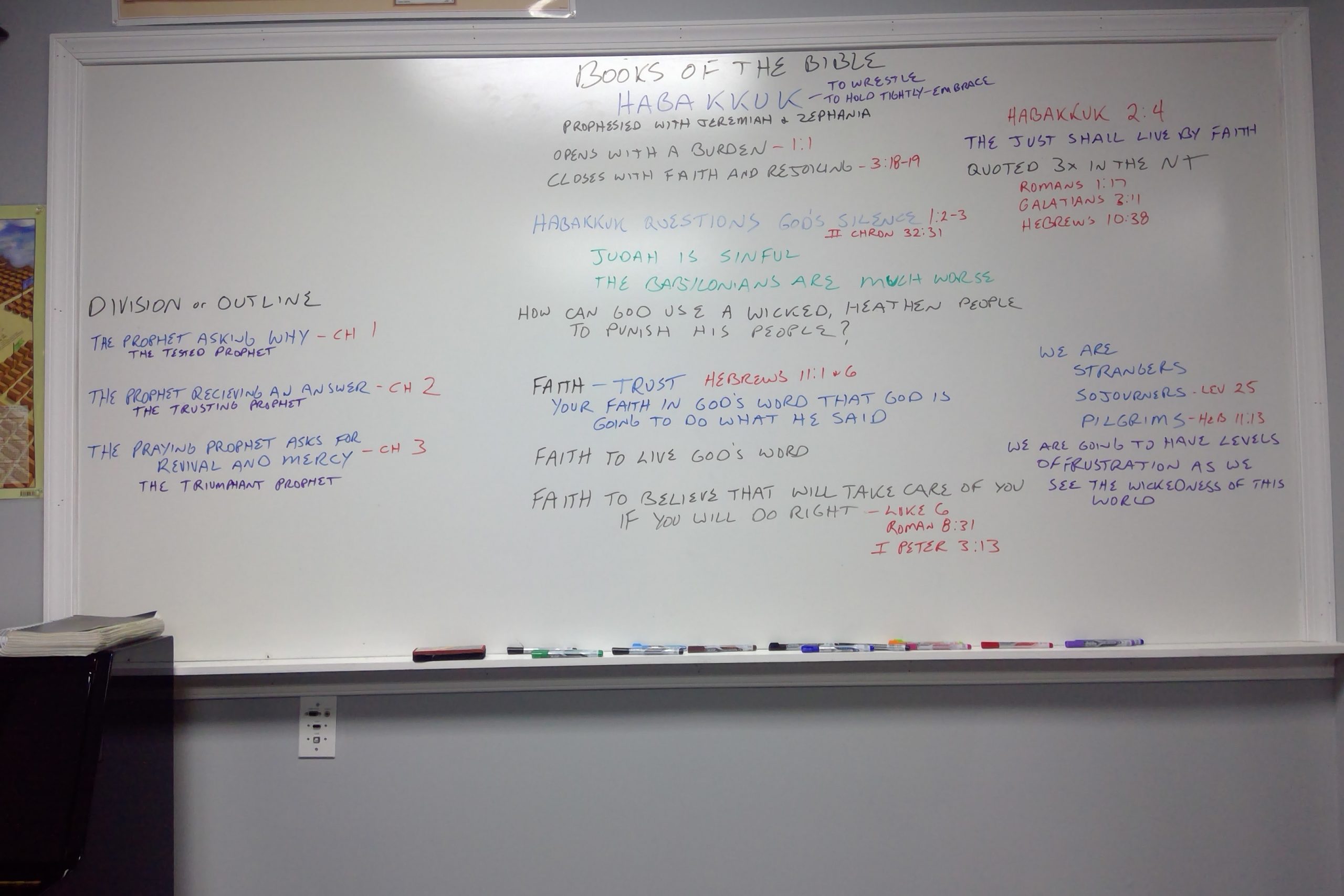 THEME:         There is a keynote of faith ringing throughout the entire prophecy.  Habakkuk, the prophet called, “The Doubting Thomas of the Old Testament,” questions God when His revelation is made known to him.  Once the facts are in and the messages are made clear, he comes to a strong position of faith.

Habakkuk was the last of the prophets writing to the Southern Kingdom before the captivity by Babylon (1:6).

He probably prophesied during the reign of Josiah about 640-609 B.C.

That is really all we know about the prophet.  Some think he was probably a Levite connected with the music of the temple.

WRITTEN:     – The Book was written just after the fall of the Assyrian Empire.

– Egypt and Babylon fought a major war to see who would be master of the earth.

– The Babylonians won and joined forces with the Chaldeans.

– They became one kingdom and used the names of Babylonians and Chaldeans synonymously.

The Book gives two distinct parts of a single prophecy:

PURPOSE:    To give light on why God sometimes allows the wicked to prosper.

To give light and understanding as to why God would use a more wicked nation to punish a nation of His Own people.

The Jews believed very strongly in temporal punishments and rewards.  The question is answered by setting forth the contrast between the temporary and the permanent.

God is working on a long-range program and sometimes allows temporary setbacks to accomplish His overall purpose.

The Intercession of the Prophets (3:1,2)

FACTS: – The question of the Book of Habakkuk is “Why?” Habakkuk reveals an unique approach of searching the mind of God by asking questions about the ambiguities between the holiness, justice, and mercy of God. He saw the punishment of the sins of the people of Israel by another wicked nation in Babylon, but Babylon did not have the blessing of a covenant with God. God uses the heathen to punish His people, but God also punishes the heathen (Ps. 9:16-17; Luke 17:1). Habakkuk realized that these ambiguities in his mind when no doubt his own lack of understanding because he knew that God’s answers were going to reprove him (2:1; 2 Tim. 3:16). Habakkuk feared the words of God (Isaiah 66:2; Hab. 3:2).

– Nahum deals with the Lord’s judgment of Assyria.  Habakkuk takes up a similar note against Babylon for the same cause.

– The Book is closer to the Psalms in structure than any of the other prophetical writings.

– The Book moves from perplexity of the prophet to praise by the same.

– Habakkuk was confused and bewildered.  It seemed that God was doing nothing to straighten out the conditions in the world.  The prophet had been involved in the Great Reformation under good King Josiah.  It just didn’t seem to make sense that God would still punish Judah by Babylon under these conditions.

A SCHEDULE OF THE EVENTS OF THE PERIOD

– Habakkuk lived at the same time of Jeremiah and Zephaniah.

Habakkuk 2:5-6    Yea also, because he transgresseth by wine, he is a proud man, neither keepeth at home, who enlargeth his desire as hell, and is as death, and cannot be satisfied, but gathereth unto him all nations, and heapeth unto him all people:

Wicked people often muster the courage to commit crimes through liquor and drugs. The antichrist will control the masses of people through drunkenness and drugs (Rev. 9:21). A passive people will comply with any rule of the global community. Any dissenters of public policy will be forced to comply or face imprisonment (Ps. 79:11-12). Mind control techniques through drugs and terrorism will be perfected by the Antichrist and the news industry.

Habakkuk 2:10     Thou hast consulted shame to thy house by cutting off many people, and hast sinned against thy soul.

The antichrist will greatly reduce world population through wars, disease, and genocide.

Habakkuk 2:12    Woe to him that buildeth a town with blood, and stablisheth a city by iniquity!

Habakkuk 3:1-5    A prayer of Habakkuk the prophet upon Shigionoth.

3 God came from Teman, and the Holy One from mount Paran. Selah. His glory covered the heavens, and the earth was full of his praise.

4 And his brightness was as the light; he had horns coming out of his hand: and there was the hiding of his power.

5 Before him went the pestilence, and burning coals went forth at his feet.

INTRODUCTION:  Habakkuk prophesied in the last years of the reign of King Josiah.  The book was written just before the captivity.  Israel was going to be destroyed.  She was going into bondage.  Nothing could be done.  Habakkuk does not present Israel an opportunity of repentance or salvation from captivity; neither does he lament the fact that Israel is going into captivity, as does Jeremiah in Lamentations and as does Micah.  Rather, he explains that he is pleased that the justice of God is going to be meted out and that the holiness of God should be vindicated.

JUDGMENT IS INEVITABLE. See Habakkuk 1:5-11.  Here Habakkuk reminds them that they are going to be destroyed, that there is no hope for escaping this destruction, and that the destruction will be complete and horrible.  Some prophets, like Isaiah, pleaded with Israel that she might turn to God and be spared.  Later, others, like Micah and Jeremiah, realizing that there was no hope for preventing the judgment of God and the captivity, wrote lamentations of heartbreak because of the inevitable destruction.  However, Habakkuk is strong on the holiness, righteousness and justice of God.  Since God has placed certain penalties on certain sins, Habakkuk reminds us that there is nothing one can do but expect God to exact the proper penalty for the sin committed.

Years ago in the EDINBURGH REVIEW, a Scotland newspaper, the caption on the top of the paper every day read, “The judge is condemned when the guilty is acquitted.”  God cannot let sin go unpunished.  God must be just and righteous.  On the other hand, God is merciful and loving.  God’s justice says that sin must be paid for, and God’s mercy provided that payment for us in Jesus Christ.  Someone who does not owe the penalty for sin must pay the penalty.  Jesus came, lived a perfect life, and did not sin; therefore, He did not owe the penalty.  Hence, if He paid the price, He did not have to pay it for Himself and He could pay it for us.  He became our substitute, and the righteousness of God was vindicated.

This is why God cannot forgive someone because he joins a church, gets baptized, takes communion, turns over a new leaf, lives a good life, loves his neighbor, takes the sacraments, observes holy days, etc.  All of these things are the works of man and will not satisfy the holiness of God and His righteousness and justice.  His justice says that sin must be paid for, and it can be paid for only by a sacrifice acceptable to God.  The only sacrifice acceptable to God is that of Jesus Christ, His Son.

III.       HABAKKUK TURNS TO THE INDIVIDUAL.  Habakkuk realizes that there is nothing he can do to prevent judgment.  He also realizes that there is nothing the Israelites can do to prevent judgment.  Realizing that the ship is sinking, he turns to the individual and prophesies to him that he individually can receive mercy from God in spite of the fact that the judgment of the nation is inevitable.  He lists several woes on the people, reminding them of things they ought not do.  Let us notice them.

CONCLUSION:  Since the ship was sinking, Habakkuk turned to individuals.  Perhaps our civilization is sinking.  Perhaps we cannot save America (if America is unsavable); we can at least try to save the individual.