An Overview Of The Book Of Zephaniah 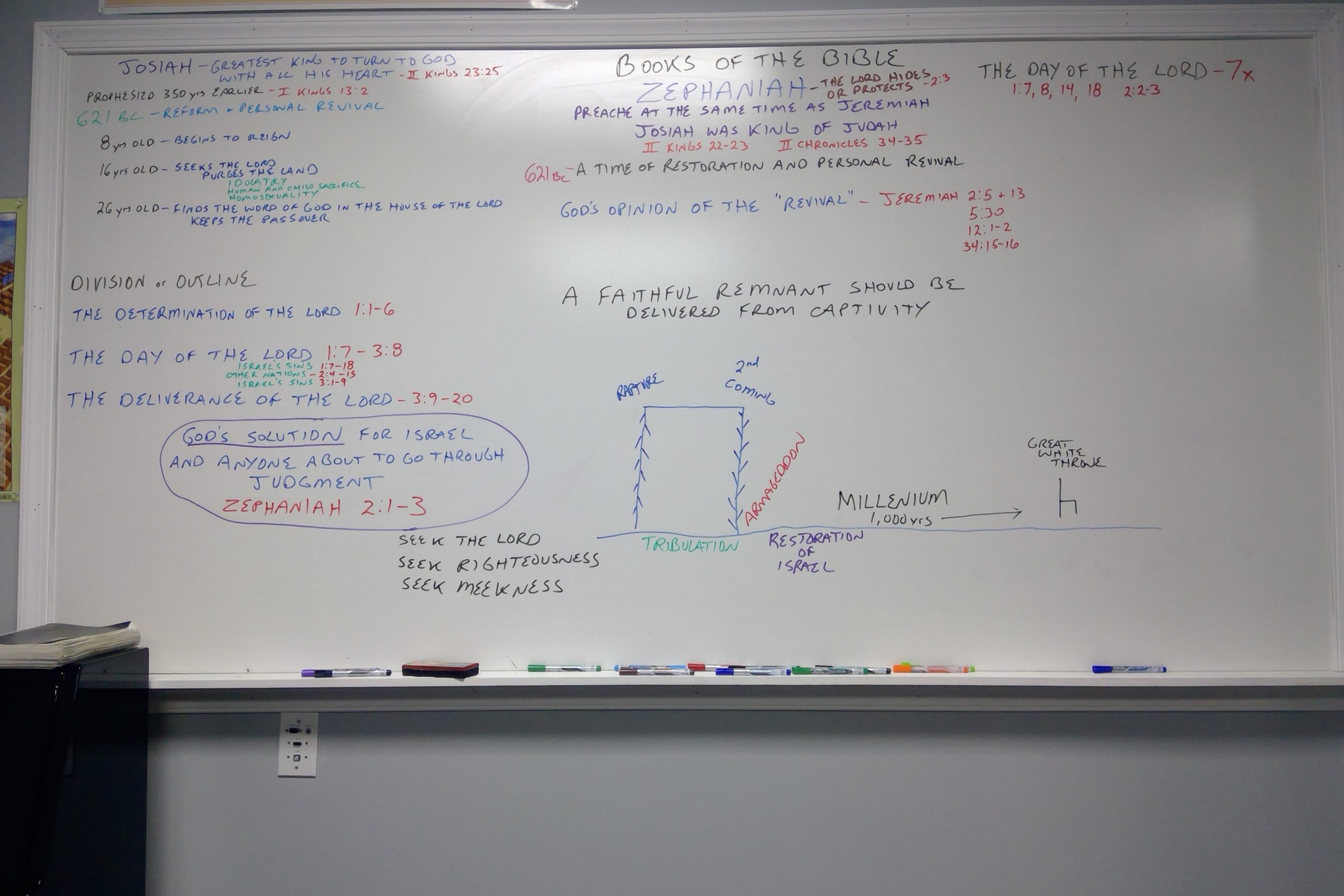 DATE:   Zephaniah prophesied about 630 B.C. in the reign of the young and good King Josiah.

– Zephaniah’s prophecy was about fifty years after Nahum, but before the actual destruction of Nineveh and the collapse of the Assyrian Empire.

– The Babylonian Empire was in the making, but it had not come to the front yet.

– He was the great, great grandson of King Hezekiah and, therefore, of royal blood.

– He was also, of course, influenced by the moral principles and good traits of King Hezekiah.

– His ministry may well have helped prepare for Josiah’s personal revival of 621 B.C., which occurred when the law of Moses was rediscovered during the repair of the temple (see 2 Chronicles 34, 35).

WRITTEN: – Zephaniah was written to pronounce judgment during the present time, and to give a look into the future; the Millennium.

– Even though Nineveh would not fall until 612 B.C., some eighteen year later, yet the threat of Assyria on Judah was now gone.

– It is well to keep in mind that the prophecy was written in a time of favorable conditions for such writing, while young Josiah was setting in the reforms of his earlier predecessor, Hezekiah.

– Even though the prophecy is emphatic about judgment and wrath, the final chapter looks away to the end of time to picture Christ’s glorious reign and future glory of a restored Israel.

– It is written, also, to give practical application to this present time for believers.

PURPOSE:  “Warning to the Righteous During a Time of a SUPPOSED Revival”

God gives His opinion of the “revival” under Josiah.

Jeremiah 2:13  For my people have committed two evils; they have forsaken me the fountain of living waters, and hewed them out cisterns, broken cisterns, that can hold no water.

Jeremiah 5:30-31  A wonderful and horrible thing is committed in the land;

31  The prophets prophesy falsely, and the priests bear rule by their means; and my people love to have it so: and what will ye do in the end thereof?

FACTS:           – Good King Hezekiah had been succeeded by three descendants before young Josiah came on the scene and Zephaniah began to prophesy.

– Two of the kings were wicked and idol worshipping kings.

– The rich had amassed a great fortune by their oppression of the poor.

– Conditions were very bad when Josiah, only sixteen years of age, undertook to promote a revival of religion.

– He was one of the most beloved kings of Judah.

– He took a hatchet and hewed down the altars and images of Baal.

– Zephaniah foretold the doom of Nineveh, as Nahum had done (see Zephaniah 2:13).

– Tradition says that Jeremiah prophesied at the same time.

– The Book begins with sorrow, but ends with singing.

– The first of the Book is full of sadness and gloom, but the last section contains one of the sweetest songs of love in the Old Testament.

– Three classes of false worshippers of Judah are denounced.  (1:4,5)

– Then there were those who turned backward from outwardly following the Lord and began to despise Him (see 1:6).

– Joel, Hosea, Amos, Micah, Isaiah and other prophets besides Zephaniah make mention of the “Day of the Lord.”

– Zephaniah has none of the tenderness of Jeremiah.  Instead, he hammers hard at the nation’s conscience.  He does end on a happy note looking beyond the time of wrath to the blessings of God’s restoration of Israel during the Millennium.

The judgments Pronounced by Zephaniah Fell Into Three Categories:

BEGINNING THOUGHTS:  The Minor Prophets from Hosea through Zephaniah all dealt with the period of time before the captivity.  However, there were at least three different types of prophets.  Some of the prophets warned Israel while she was in sin that if she would turn from her sin, she could be forgiven and restored; if she would not, she would be punished.  Then there are those prophets who lamented.  Judgment had already been pronounced.  There was no way that God would change His mind, and the prophets lamented.  Zephaniah had a unique place among the prophets during the period before the captivity.  He prophesied during a time of a “forced” revival.  Josiah was the king, and the “revival” was in progress.  Zephaniah prophesied to the people who were being made to live righteous, warning them of what would happen if they didn’t stop their hypocrisy.  Zephaniah prophesied to the people with Jeremiah telling them what would happen if they did not return to the LORD.

There are two things that the church is supposed to do:  (1) reclaim the sinner who has gone into deep sin, and (2) help the person who has not gone into sin to avoid its pitfalls.  Sin is not supposed to be condemned only when it is present; we are supposed to warn the people of sin.

In Zephaniah 3:1-7, he exposed the sinful.  In Zephaniah 1 he reminded them of the judgment that was coming because their religion was a two-faced “Joke.”  Zephaniah was preaching judgment on the hypocrisy of Israel.

It is wonderful for us to hear the testimony of people who have been delivered from deep sin.  It is infinitely more wonderful for us to hear the testimonies of people who have never gone into deep sin.  This is what we want for our young people.  (Teacher, explain to the young people that that is why we preach so hard against sin.  It is not always because we are afraid young people are already in sin, but because we want to paint sin so black that they will never want to go into it.)

Let us notice the time during which Zephaniah was written.  It was a time of a “forced” revival under King Josiah. In other words, Josiah himself had a personal revival but the people did what they were told but did not have revival.  A true revival spares a nation of judgment.  Let us notice several things about the conditions of the day.

JOSIAH WAS ONLY EIGHT YEARS OLD WHEN HE TOOK POWER. Read II Chronicles 34:1.  Hence, Josiah had to have much counsel.  He was a young child king. The priest Hilkiah was his great counselor.  (Teacher, explain to the young person the importance of having counsel.  Talk about the cabinet composed of a Christian who is in the profession he plans to enter, his pastor, his parents, a dear friend, etc.  He should always counsel with these people before making any decisions of any importance.)  Josiah could have said that he could make it on his own, but he realized his need for counsel.

JOSIAH DID RIGHT AND WALKED STRAIGHT.  See II Chronicles 34:2.  (Teacher, stress the importance of our young people walking straight and always doing right.  Right should be done regardless of the consequences.)

IDOLS WERE BROKEN.  Notice II Chronicles 34:3-7.  The idols were ground to powder, torn down, etc.  (Discuss here the importance of having nothing before God.  An idol can be an idol of wood or stone; it can also be a habit, a pleasure, work, etc.  Nothing should come before Christ!)

JOSIAH HAD THE TEMPLE REPAIRED. See II Chronicles 34:8.  True revival is always built around the house of God and the repairing of it.  Today we have the New Testament church, a body of believers meeting regularly for fellowship, for the study of the Bible, and for the edification and the propagation of the Gospel.  When true revival comes, it will not be outside the church—it will magnify the church and be built around the church!  (Teacher, stress the importance of building one’s life around the church and its activities.)

THE PEOPLE REALIZED THEIR SIN. See II Chronicles 34:18-21.  Notice, there was the cleansing of the house of God; then there was the finding of the Bible; now there is the realization of sin.  The Bible is the mirror that shows us our need of cleansing.  Josiah realized their sin.

THE PEOPLE MADE A COVENANT WITH GOD.  Read II Chronicles 34:31, 32.  They gave themselves to God and covenanted to serve Him.  The people had to do this because Josiah was having a personal revival. Josiah tried to make the atmosphere welcoming to a revival but he could not force the people to have their own personal revival so instead of having a nation wide revival they had a nation wide reform.